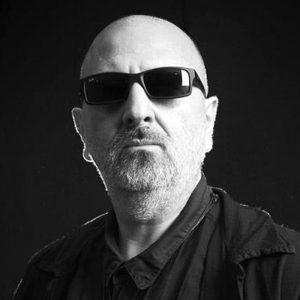 Valerio Bindi defines himself as the Anti-Director of Crack !, a historic festival of comics and printed arts that since 2004 has seen the free and free participation of hundreds of artists of all ages from all over the world. Architect, illustrator, author of comics (Graforibelli, Pulp Comix, Zone Temporarily Mutanti, Wonderpark, Condominium), he is part of the SCIATTO group produced since 1990 for the design of hypermedia installations and reversible architecture, a work on urban autonomous areas presented in Italy and in Europe (Praha / Festival 1990; GAEM / Biennal, Sarajevo Rome 1998/99; Venice Biennale, 2000). At the Forte Prenestino in Rome, in addition to organizing the Crack !, he works in the organization of the BaBeL2 festival and the Fortepressa editions. Since the late 1990s he has been teaching temporarily in Design and Multimedia in university and master courses at the University of Rome. He wrote and invented fanzines, books, stories, critical articles and an essay, Digital Animation.