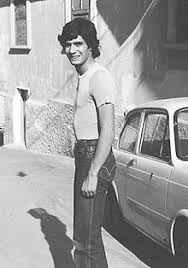 The images of Andrea Pazienza and Tanino Liberatore for L’Aquila are a tribute to their most well-known characters, who have become icons, live in the collective imagination to have appeared on the covers of important publications in the sector and beyond. The link between the two artists and Abruzzo is known: Pazienza was trained in Pescara, where he moved to the age of 12. Here he enrolled in the “Giuseppe Misticoni” artistic high school, where he made friends with Tanino Liberatore, born in Quadri, in the province of Chieti, who also arrived on the Abruzzo coast for study purposes. Starting from the larger images on the right of the scaffolding, the first character we meet is Ranxerox, created in 1978 by Stefano Tamburini and Tanino Liberatore: an out of control and taboo-free android, in love with Lubna, who moves in a post-atomic New York or in a hyper-technological and sprawling Rome of an imaginary future that prefigures, among other things, the subsequent cyberpunk movement.

The board chosen was created specifically for the cover of “Ranx – Complete edition”, which includes for the first time all the adventures of the “synthetic bond”, published in Italy in 2012 by Comicon Edizioni. The parade of images on the Frezza scaffolding continues with the unmistakable profile of Bolognese Massimo Zanardi, called “Zanna”, who takes us straight into the very first production of Pazienza which then gave voice to his disenchanted 77ina generation, between creativity and drugs, sex and irony. Beak nose and evil eye, together with the treacherous Colas and Petrilli, the young Zanna knows by heart the films of Bruce Lee and reads Hagakure (the secret collection of teachings for samurai of the ‘700), is a lover of the perfection of the gesture, but it is moved by an inner emptiness that seems to work in an almost Zen way or as a samurai discipline devoted, however, to futile or cruel intent.

The portrait chosen for L’Aquila is the first one created by Pazienza, who appeared in the unforgettable number 5 of Frigidaire in March 1981 with “Scholastic Yellow”. Continuing to the left of Zanardi we find a table always made by Pazienza in 1980 for the poster of the film “The city of women” by Federico Fellini: a mysterious woman looks at us, has her fleshy lips sealed and a single earring, red, while her wavy hair occupies most of the design, like the waves of a stormy sea. This is the story of Fellini reported in a 1983 dialogue with Vincenzo Mollica: “for The city of women I wanted a poster that diverged from the usual because it is a film that has science fiction aspects as well as being a dreamlike journey into the labyrinth of the psyche of the Italian male. I chose Andrea Pazienza for the creation of the poster precisely because I thought it could illustrate and anticipate the spirit of the film. Andrea made a series of sketches and finally I chose a drawing that seemed more like a lady’s hairdresser advert, but had the I have the honor of being very suggestive.”

Finally, the other portrait of a woman, this time by Tanino Liberatore, an unedited version and variation of the table created for the poem“ La Maschera ”by Charles Boudelaire, which later became the cover of“ I fiori del male ”. “, The 2016 volume containing 29 poems of the French poet freely illustrated by Liberatore. As we read in the poem, this time it is a “Long dark, languid and mocking look; / that graceful face, framed with veils, / of which every feature tells us with a triumphant air: / “Voluptuousness invites me to love crowns me! / See what exciting charm gives kindness / To this being endowed with majesty! / Let’s get closer, and turn around its beauty. ”LIST OF WORKS AND CREDITS: Andrea Pazienza,“ Zanardi ”, 1981, copyright Andrea Pazienza & Marina Comandini Pazienza; Andrea Pazienza, “The city of women”, 1980, copyright Maria and Michele Pazienza; Tanino Liberatore “Variant”, cover of “The Flowers of Evil”, 2016 – Copyright Tanino Liberatore & COMICON; Tanino Liberatore “Ranxerox”, cover of “Ranx – Complete Edition”, 2016, – Copyright Tanino Liberarore & COMICON. Installation created in collaboration with alino and COMICON.