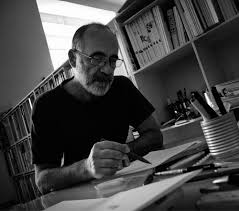 Guido Scarabottolo graduated as an architect from Milano’s Politecnico. In 1973 his career path permanently veered when he joined Studio Arcoquattro, a group of young architects active in the area of graphic and exhibition design. Guido went on to be revered as one of Italy’s most outstanding graphic designers and illustrators. One of his greatest pleasures has been collaborating with Italo Lupi, the renowned designer of the internationally acclaimed magazine “Abitare.”

Currently his illustrations appear regularly in the Sunday edition of Il Sole 24 Ore and frequently in publications such as Internazionale, The New York Times, The New Yorker and a notebook for a Japanese client, Cherry Terrace, dedicated to the astrologic animal of the year. One of his most recent assignments was to illustrate a “doggy bag” package to be distributed in many restaurants in Milan during the EXPO 2015.

Additionally, Guido has been the art director of the publisher Ugo Guanda Editore for over a decade. He has designed all of their book covers, illustrating most of them.

Occasionally he also illustrates children’s books for Topipittori and Vanvere editions and makes “iron drawings” (the latest, a 6 meter tall fisherman with a big fish on his head, which can be visited at Milan’s “EXPO,” at the “Islands, Sea and Food Pavilion”).

Franco Matticchio (1957 to present, Italian) is a painter, illustrator and comic book writer. He first published his work in 1979 and has, since that time, published his cartoons and illustrations in many books. In 1999, one of his illustrations was published on the cover of the U.S. magazine The New Yorker.