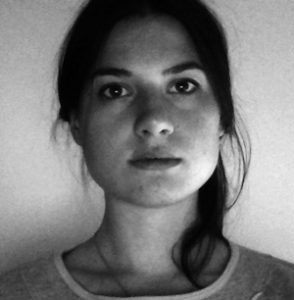 In May 2016 Off Site Art opened a call by Silvano Manganaro addressed to students of the Academy of Fine Arts of L’Aquila. Born in Popoli (1991) and enrolled in the two-year specialization in painting Lucia De Novellis, she was selected with her site-specific work created for this scaffolding entitled “Postcards from invisible cities”. These are two illustrations that represent interpretations of De Novellis freely taken from the book “The Invisible Cities” by Italo Calvino and which intend to create a link with the city of L’Aquila: “… traveling in the territory of Ersilia you meet the ruins of the cities abandoned, without the walls that do not last, without the bones of the dead that the wind rolls: cobwebs of intricate relationships that seek a shape “(I. Calvino).

I usually leave the house with the sky under my arm.