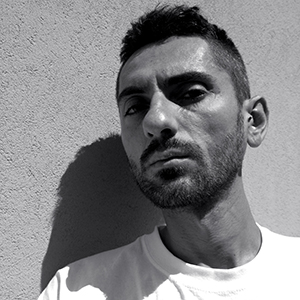 Giovanni Matera (1986) was born in Gravina in Puglia, an area with a strong and ancient history and great landscape beauty. He then moved to 15 years in the province of Forlì, where he attended the State Institute of Art with a Goldsmith’s address. In 2007 he was selected to participate in the Higher Artistic Training course in Pietrarubbia (PU), TAM Center (Artistic Treatment of Metals), founded by Arnaldo Pomodoro and having Nunzio Di Stefano as artistic director. This experience was extremely formative and prompted him to continue his studies. He moved to Bologna at the age of 20, lived the cultural fervor of this city, attending the Academy of Fine Arts and graduating in Sculpture in October 2011. He then continued his studies by enrolling in the annual photography course at the center of photography SpazioLabò.

In 2015 he lived a voluntary experience in southern Spain, in contact with very complex social realities. He currently lives and experiments in Bologna. In his series for L’Aquila he says: The title of the project: “I want to drink all the water in the world in one sip” is a phrase and a title that I use and which contains the deepest meaning of my approach to photography and visual. It arises from the need to document moments, situations, circumstances of my life that I live with extreme emotion, which often come from the “sub-villages” of Bologna. Realities often considered degraded, exploited by the mass media, realities that teem with creativity and that still make Bologna one of the most avant-garde cities in the Italian socio-artistic-cultural panorama. These photos are not purely documentary; these photos are the people I love, whom I meet, they are remains of walls that strike me, that surround me and that I capture. This is my diary. “