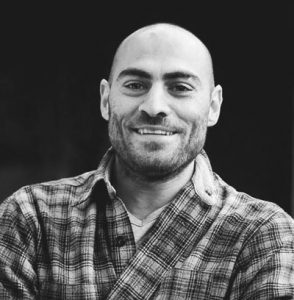 Giuseppe Zema aka Dazo Molino (Reggio Calabria 1983). I have been lucky enough to travel a lot since I was a teenager, wandering between Europe and South America. These places that will influence my artistic growth. Traveling I got closer to history, art, great writers and above all photography, the artistic medium that I use most. I lived for short periods in Poland, Belgium and Ireland.

In Italy, after several work periods and long stops (Como, Cortina d’Ampezzo, Genoa, Turin) I lived for about 2 years in Rome. But it is the Balkan area that has the strongest impact on my work. By attending the local art scene in the Balkans, over the years I have developed the desire to create a cultural space also in my hometown. Back in Reggio Calabria, I then started to collaborate with several travel blogs for which I describe local itineraries.

I continue to maintain a link with the Balkan peninsula, especially in Croatia where I have started a collaboration for a sculpture park in the city of Solin, near Split. I started my artistic journey by making the first installations and participating in the first group shows, later I was very attracted to craftsmanship thanks to my experiences in the Balkans.

The first gratification came by winning an artistic call and with it the first solo show after a few months in the “MAW space” of Sulmona. I founded Quattromura Studio Lab together with other artists, a co-woriking space and multilab. It is a small emerging reality in the field of design and the revaluation of spaces. On my work “Basidusdsfois theorem” Alessandra Morelli wrote: “The theorem enunciates a numerical grammar that approaches, scientific and yet trembling, to a very human definition of wonder. A refined and protected photographic vision, which seems to want to contain the profile of a landscape, decrypting it quickly, so that the Beauty does not disappear waiting for the solution. “

A multipurpose meaning that is resolved in its indecipherability.