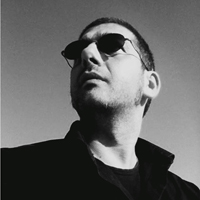 Born in Teramo in 1971 where Giampiero Marcocci lives and works. He has been involved in photography since 1994. He attended a two-year period of study at the Higher Institute of Photography in Rome.

His recent photographic work is directed towards the installation, in which works of different formats dialogue to materialize landscapes dominated by the poetic signs of the imagination and the enchantment of dreams. In the work created for L’Aquila, a suspended figure reveals the driving force behind each ascension. Man reaches out towards the light. The figure is Telemachus: the one who sank in the desire to embrace his father; who ventures by sea, facing the unknowns of a perilous journey in search of his parent and to find himself.

The image of Giampiero Marcocci becomes an exemplary metaphor for this re-emergence towards the light faced by Telemachus who does not allow himself any melancholy vein, no blinding and nefarious fury, however, favors the idea that “something from the sea always comes back”.

The moment of change is the only poem.