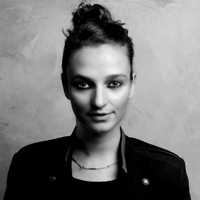 Clara Vannucci is an Italian documentary photographer who focuses on the criminal justice system. After a degree in graphic design at the University of Architecture in Florence, she decided to move to New York for an internship at Magnum Photos and to assist photo journalist Donna Ferrato for over 2 years. She teaches photography at the Opera Prison and is represented by Daria Bonera DB for corporate and advertising.

She is a freelance photographer for numerous magazines and newspapers, and her clients and publications include: The New York Times, TIME, VOGUE, New York Magazine, L’Uomo Vogue, D La Repubblica, GQ France, Stern, Il Corriere della L’Uomo Vogue Evening. Her stories tell the Italian and American criminal system: with Crime and Redemption, a report on theater in the Volterra prison, showing that acting in prison can be an effective way to change the way a criminal mind works.

She won a two-year scholarship in FABRICA where she developed her third project on the criminal system: Bail Bond. Bondsmen, defendants & bounty hunters, a visual story that shows a little-known part of American law, a place where crime and security blend. Rikers Island: It all started in 2009, when I met Donna Ferrato, an internationally renowned photojournalist, who, enthusiastic about my project on prisons in Tuscany, gave me the incredible opportunity to continue my project on prisons, this time in New York. I had access to Rikers Island through a program founded to end domestic violence (ATI), unique in NYC and the United States. According to statistics provided by the New York Correctional Association, over 90% of inmates in this section have experienced physical or sexual violence in their lives. For 25 years, ATI has been trying to respond to the needs of domestic violence survivors who are accused of crimes related to the abuses they have experienced. Rikers is the largest and probably most famous prison in the United States. Its 18 buildings with around 70,000 inmates are on an island between the Bronx and Queens. I first came to the Battered women section in 2009. I quickly learned that many women hadn’t seen their faces in years because they can’t use mirrors. , considered a potential weapon, within the institution. In fact, when I showed them the shots taken the previous time, I understood how important an image could be and arouse emotions of all kinds: from amazed faces that struggle to recognize each other, crying, laughing, teasing.

Through the lens, I had the sensation of offering them a mirror. An image that they cannot keep with them in the cell, (because it could be used to create false documents) but that makes them feel women. Nobody has photographed this section of the Rikers before. And for this I feel a great sense of honor and responsibility.

A good image needs no words.