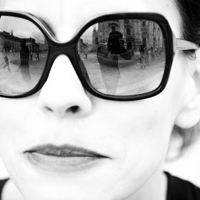 Claudia was born in Rome in 1975. The revolutionary air of the ’70s broods in her for many years, too many according to her, because it is only in 2009 that she gives up everything and decides to devote herself to photography. She leaves the beloved family coachwork, re-reads the thesis on the right of asylum discussed at the Faculty of Political Sciences at La Sapienza and looks for a combination between the passion for contemporary history, the desire to witness it and photography.

She chooses to learn to photograph by attending the Graffiti photography school, following various workshops and enrolling in the ISFCI master’s degree in photo-journalism. She decides to document the reality that surrounds her, but also the rest of the world, where possible, with the curiosity of those who want to get rich and the desire to enrich those who look at her photos. She prefers the stories of women, in which she discovers herself, and the long-term projects, in which she immerses herself.

She has published on A, The Guardian, Kristeligt Dagblad (dk) and other small foreign newspapers. With her reportage “Ashura”, held in Iran, in 2013 she finished third in the competition dedicated to the photo-journalist Rolando Fava and second in Fotoleggendo; in 2014 he received the honorable mention in the IPA and MIFA competitions.

Since 2016 she collaborates with the LUZphoto agency, but remains a freelance. Behind is a project started in 2012 with the aim of discovering a country known for its ancient splendors, but recounted as one of the most dangerous in the world after the Islamic Revolution, which in March 1979 transformed the country’s monarchy into an Islamic Republic: Iran. The “Behind. Secularism and religion in Iran ”tells about daily life, the rites of commemoration for Imam Hossein (martyr of Ashura), the moments of prayer and the private parties of people, religious and non-religious, who seem to travel on parallel tracks. Currently about 65% of the Iranian population is under 25 years old. Born after the Islamic Revolution, many young people do not recognize themselves in those values. Full of desires and hopes, but with an attitude that seems sad and peaceful, this part of the population lives pursuing their dreams: to love, sing, dance, write, parade and travel the world.

The ongoing project has so far been carried out in Tehran and Nooshabad, a small town in the province of Isfahan. In the photo, the newspaper of a Shiite Muslim family. Reyhane, 21, is looking for a pot in her kitchen, with her husband Hossein, 26. In the background his mother Zohre, 42 years old, and his brother Mahdi. Shiite Muslim women must not wear the veil or chador when they are at home in front of other women and men, the latter, with the closest relationship. Zohre, in obedience to his prophet Muhammad and the Koran, wears the veil, because he knows he is being photographed.

A horizon that does not reach infinity does not make me breathe deeply. Everything must be possible in my life.