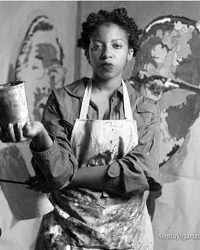 Sophia Dawson, 28, is a Brooklyn based visual artist who has dedicated her life’s work to exposing the stories and experiences of individuals who are striving to overcome the injustices they face both individually and collectively.  By raising awareness of these individuals she aims to humanize social justice issues and to prevent such experiences from being repeated in the future.  She holds a bachelors degree in fine arts from the School of Visual Arts and a masters degree in visual arts administration from New York University.  Her work has recently been exhibited in Rush Arts Gallery and the Bronx Museum for the Arts.  Some of the subjects of her work include mothers who have lost their children to police brutality both past and present, the Central Park 5, and political prisoners from the Black Liberation movement that are still incarcerated within the United States.

“This painting was inspired by the film “Black Power Mixtape.” In this still a young woman from Harlem talks about her experiences and all of the challenges she hopes to overcome.” –Sophia Dawson