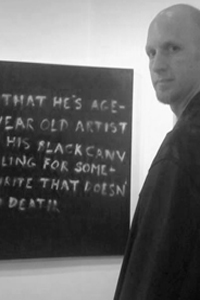 Paul Raphaelson spent most of his art career photographing the urban and cultural landscape with big cameras. Lately he’s been been branching into other related experiments, involving the subway, the remains of advertising, and empty industrial spaces. He sometimes trades camera for pen, to see what language can do, and has been trying, with difficulty, to get both tools to play nicely together. He’s been musing questions about what’s next for photography—what it might be doing, instead of this same old stuff—and what’s going on in art and culture now that the postmodernists are dead or bored. Paul’s work has been published and collected all around the world, and he lives and works in Brooklyn.