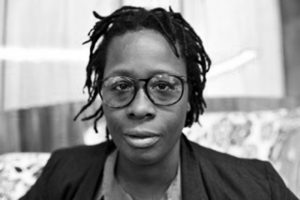 Mickalene Thomas was born in New Jersey in 1971. Thomas earned her MFA from Yale University, and holds a BFA from Pratt Institute. In 2002-­‐2003 she participated in the Artist-­‐in-­‐Residence program at the Studio Museum in Harlem and in 2011 she was a resident at the Versailles Foundation Munn Artists Program in Giverny, France. Recent awards include the 2012 Brooklyn Museum Asher B. Durand Award, Timerhi Award for Leadership in the Arts, the Joan Mitchell Grant and the Pratt Institute Alumni Achievement Award in 2009, and the Rema Hort Mann Grant in 2007. Thomas has exhibited extensively both nationally and internationally including “30 Americans” at the Corcoran Gallery in Washington, D.C; “Mama Bush: One of a Kind Two” at the Hara Museum in Tokyo, Japan; “Americans Now” at the National Portrait Gallery in Washington D.C.; “Something You Can Feel” at La Conservera Contemporary Art Centre in Ceutí, Spain; and her solo exhibition, “Origin of the Universe,” at the Brooklyn Museum of Art. Thomas’s work can be found in significant museum collections including the Museum of Modern Art, the Brooklyn Museum of Art, the Solomon R. Guggenheim Museum, the Whitney Museum of American Art, the Nerman Museum of Contemporary Art in Overland Park, KS, the Rubell Collection in Miami, FL, and the American Art Museum, Smithsonian Institution in Washington, D.C. Thomas is represented by Lehmann Maupin in New York, and Susanne Vielmetter Los Angeles Projects. Her work has been featured in various catalogues and reviewed in ArtForum, Art in America, The New York Times, The New Yorker, NY Arts, Modern Painters, and Whitewall among others. Mickalene Thomas lives and works in Brooklyn, NY.