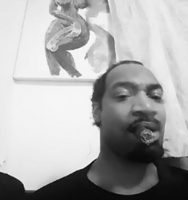 Malcolm Williams was born in Brooklyn, New York in 1968. Malcolm works predominantly in the medium of painting using acrylic paints but also works digitally to create designs and posters. Malcolm completed an AA at the Art Institute of Seattle in 1997, going on to acquire both BA and MA in visual communications by the 2000s. He has been in group shows in on both coasts in NYC, Seattle, and Oakland, CA.

“My work explores the relationship between the body and life as performance.” –Malcolm Williams