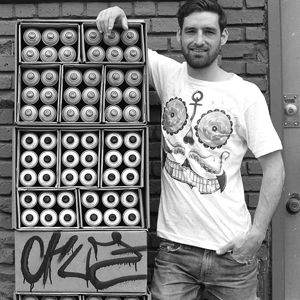 Federico Massa in art iena cruz is a Milanese artist. He moved to Brooklyn, New York in 2011, after four years in the Big Apple he obtained the Green Card for Extraordinary Ability. His work has been exhibited in New York, Baltimore and Miami. His murals are present in many cities around the world, including Mexico City, Ibiza, Barcelona, ​​Miami and New York City. Since the 1990s in Milan, Federico has consolidated his reputation as a thriving rebel within the street art movement. At the Academy of Fine Arts in Milan he then developed his own personal style, in continuous evolution and on different surfaces, characterized by spray strokes, stancyl and precise and calibrated interventions with the brush. With his series of works entitled “Tributes”, made with posters of the Palazzo Reale stolen from the street and then re-interpreted, Federico obtains his first exhibition in New York at the Graphite Gallery in Brooklyn. However, it is only when he begins to create large-format murals that New York really notices him.

His first work on the street presents very strong references about Mexican culture, a source of inspiration for Federico from his first steps in the United States. Over time, respect is gained among the famous streets of New York, his visual imagery in the murals is amplified and his style is perfected in works in the studio, installations and sculptures. In the last years of production, Federico became aware of the issue of global climate change and the extinction of the animal species.

As an artist focused on painting animals and nature, he begins to produce works representing the rebellion of the species, where endangered animals seem to disappear from the pictorial canvases, trying to launch a last cry to the world that is condemning them. Together with the National Park of New York and in collaboration with Moma PS1, he realizes a project entitled “Forbitten Fruit”. For the occasion Federico creates the work “Camuflage”, in which a scramble jet, used in the Second World War to intercept enemy planes, is here transformed into a Green Hero, a small bird native to Central America. From machine to animal, the message reflects on the need to channel our thoughts into a positive world, made of colorful creative spaces. This is the work that Federico has also decided to use for the Off Site Art project in L’Aquila.

My message wants to channel our thoughts into a parallel world, made of colorful creative spaces.

This website uses cookies to improve your experience while you navigate through the website. The cookies that are categorized as necessary are stored on your browser as they are essential for the working of basic functionalities of the website. We also use third-party cookies that help us analyze and understand how you use this website. These cookies will be stored in your browser only with your consent. You also have the option to opt-out of these cookies. But opting out of some of these cookies may have an effect on your browsing experience.
Necessary Always Enabled

Any cookies that may not be particularly necessary for the website to function and is used specifically to collect user personal data via analytics, ads, other embedded contents are termed as non-necessary cookies. It is mandatory to procure user consent prior to running these cookies on your website.