Off Site Art/Project for L’Aquila

Hit by a devastating earthquake on April 6, 2009, L’Aquila, in central Italy, is now one of Europe’s largest construction sites. By covering L’Aquila’s ubiquitous scaffolding with bright, inspirational art, ArtBridge and Italian nonprofit organization Off Site Art hope to foster a rebirth of culture and new possibilities. View Exhibitions.

On April 6, 2009, a 5.9 magnitude earthquake devastated the city of L’Aquila, capital of the Abruzzo region, in central Italy. 309 residents died and more than 10,000 buildings were reduced to rubble.

In June 2010, ArtBridge Founder Rodney Durso went to L’Aquila to visit Antinisca Di Marco, a professor of the University of L’Aquila, and her family. While touring the damaged neighborhoods, they both saw the potential to bring an ArtBridge’s outdoor art installation to L’Aquila as a way of bringing color, light, beauty and more pedestrian and tourist traffic back to the city center. The project would also give Abruzzo’s artistic community a pivotal role in the recovery of their cherished capital.

In 2012 Durso met art critic and curator Veronica Santi in New York City. He told her of the idea to bring an ArtBridge-style project to L’Aquila and in October 2013 he invited Veronica to L’Aquila to see if the idea could be brought to life.

Shortly after, Veronica decided to move temporarily to L’Aquila in order to design and organize the project she titled Off Site Art. Two municipal decree laws were written and approved to exhibit giant size artworks on any construction scaffolding of the historical center of the city, allowing the necessary stability to an ongoing public art project. 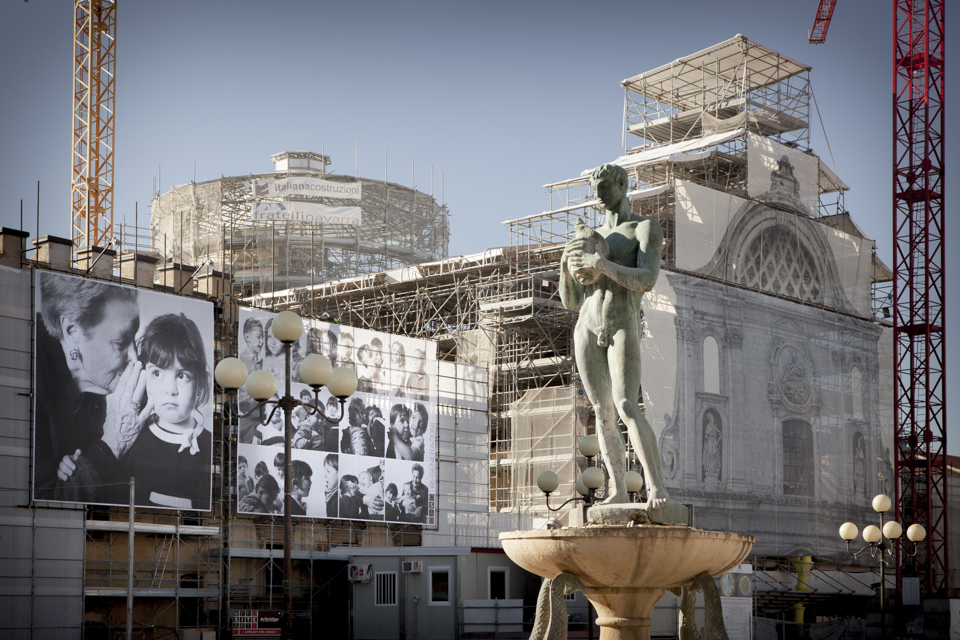 Finally, thanks to the combined efforts of Veronica, ArtBridge and many local L’Aquila residents – such as Antinisca, Camilla Inverardi (architect at Terrae Mutatae and President of Globalia), Germana Galli (founder of MU6), Franco Mancinelli (graphic designer from Pescara), Claudia Pajewski (photographer from L’Aquila) and the Mayor’s office – the first call for Arte in Costruzione was launched in June 2014 and the installation of the art began in August of that year.

In December, 2014, to empower the growth and possibilities of cultural productions inside and outside the city, Veronica, Antinisca and Claudia founded Off Site Art (OSA), as an independent nonprofit organization based in L’Aquila.

Since then, OSA has curated and organized new series of site-specific installations titled L’Aquila In – featuring artists and institutions based in L’Aquila – and Due a Due – featuring Italian illustrators. In 2015, with the collaboration of ArtBridge, OSA launched Change!, a second call for art that includes artists from Italy and New York.

Today, L’Aquila remains one of the largest construction sites in Europe, and this public art project has installed more than 60 artworks around the city, accompanying the rebirth of the city during this long period of post-earthquake reconstruction – as the city not only rebuilds its physical infrastructure, but also its cultural identity.