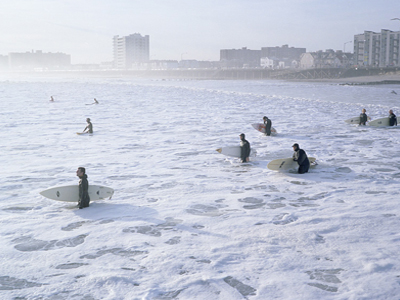 “Another New York” is an ArtBridge exhibition of 56 photographs mounted outside the Barclays Center in what may be a Sisyphean mission: to convey the inner rhythm of Brooklyn to pedestrians whose senses are already overloaded with that beat.

“We looked for those everyday moments that you see,” said the artist Mickalene Thomas, 42, one of the show’s curators, who has lived in Brooklyn since 1995. “These moments are not necessarily iconic identifiers of Brooklyn, but they’re poetic signifiers that illustrate the subtlety of Brooklyn.”

”As captured by 15 photographers, it is a Brooklyn unlike the one seen in Ms. Thomas’s mural inside the arena, which shows the Brooklyn Bridge and other landmarks. The images, mounted on plywood construction barriers along Dean Street, are quiet and still in a way that Brooklyn rarely is. The most striking, of a young couple nearly eclipsed by foliage in Prospect Park, lends a bucolic dissonance to the music of Flatbush Avenue.“I hope that people can walk by on the day-to-day, and maybe there’s an image that will inspire them or make them smile — ‘Oh, yeah, I remember that area’ — like a participant in a call and response,” Ms. Thomas said.On Monday morning, none of the few passers-by stopped to consider the art. It was too hot, the street was too noisy. But by night the streets are filled with a different crowd, and the next night with another still. This is the rhythm of this stretch of development-driven Brooklyn, to which “Another New York” adds an elusive backbeat.- John LelandMatthew Schenning, Surfers Wading Out.