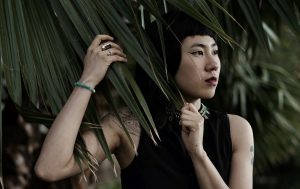 Jess X.Snow is a queer immigrant asian-canadian artist, filmmaker, and pushcart-nominated poet currently based in Brooklyn, NY. A graduate of the Rhode Island School of Design, they are currently a MFA candidate at NYU Graduate Film.

Through film, large-scale murals, poetry and community art education, they are working to build a future where LGBTQ+ migrant people of color may see themselves heroic on the big screen and city walls & discover in their own bodies, a sanctuary for healing and collective liberation. Their murals and political graphics have appeared on outdoor buildings across the country and on PBS Newshour, The LA Times, the SF Chronicle, and in the permanent collection of the Ford Foundation and the Library of Congress. Their art has been used as organizing tools at protests such as the Women’s March on Washington, as a part of migrant rights organizing on both sides of the border, as well as on college campuses to support survivors and end rape culture.

By merging a background of arts activism and trauma-informed healing practices with filmmaking, they bring together diasporic communities of color and allies to create inter-generational stories spanning genres of speculative fiction, fantasy, and musical. Their film and immersive work has been supported with grants and fellowships from the Tribeca Film Institute, Canada Council of the Arts and commissioned by Adobe, and the Smithsonian Asian Pacific Center. Their films have won Best Experimental Short Award at the Philly Asian American Film Festival and has screened at a dozen film festivals including Outfest Fusion, Newfest, Rhode Island International Film Festival, and the Hong Kong Gay and Lesbian Film Festival. Their children’s books include The Ocean Calls, written by Tina Cho, (forthcoming Kokila/Penguin Randomhouse Fall 2020).

In all of these mediums Jess pursues daring stories that challenge boundaries and binaries. They love a good rock climbing session, a heart-to-heart and an opportunity to collaborate with communities who are working toward a future free of borders & empire. Follow @jessxsnow on Instagram, Twitter