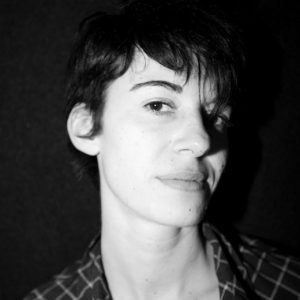 Claudia Pajewski (born 1979), a photographer who divides her time between Rome, Milan and L’Aquila.

At the age of 19 she began her training as a student of the photojournalist Sebastiana Papa. In the mid-2000s she entered the Roman circuit Phag Off, one of the first Italian experiments of queer culture characterized by a strong research of international scope, thanks to which she approached the music photography with names like The Gossip, Peaches, Planningtorock, Kevin Blechdom. From 2008 to 2013 she collaborated with Repubblica XL, for which she realizes photographic services and interviews in the field of music, contemporary art and new trends. 2014 marks the beginning of the collaboration with the singer-songwriter Motta, for which he creates portraits and album covers. The partnership opens to collaborations with different labels and artists of the Italian panorama including Nada Malanima, Teho Teardo, The list representative. For the theater she is the official photographer of the Short Theater festival in Rome. 2012 Hystrio Award, has collaborated with international companies including Ricci / Forte, Deflorian / Tagliarini, El Conde De Torrefiel, Silvia Rampelli, DOM, Lucia Calamaro. Deeply linked to her city of origin, since 2009 she has carried out cultural projects in the capital of Abruzzo. In 2017 he published with DRAGO his first book, The hands of the city, a black and white project on migrant workers from the reconstruction of L’Aquila. She is a founding member of the Off Site Art public art association.

Memory and creativity are the real cement of a city struggling to be reborn.