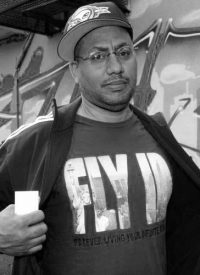 In the heart of the South Bronx in the eighties, a progressive graffiti artist widely known as “Clark” formed the crew Fly ID. Fly ID quickly became one of the leading Bronx graffiti art crews, developing a style that became emblematic of the decade’s Bronx arts scene. After a decade of illegal artwork, Clark became involved in the legal side of the graffiti art form. Clark and his crew realized that their public artwork was having a profoundly positive effect in the communities where they painted, turning rundown blocks into large-scale inspirational messages. For the last twenty years, Clark has focused on creating positive and educational art pieces in the Bronx, producing dozens of murals throughout the borough. Instagram: @clarkzilla