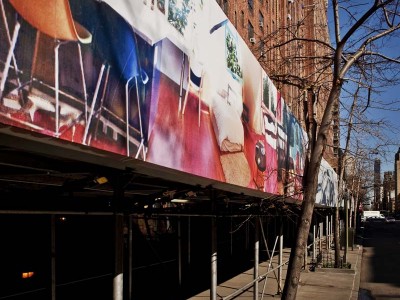 Maybe there should be new reality TV show called “Extreme Scaffolding Makeover.” While the urbanSHED competition helped focus attention on the problem of NYC’s drab and uninspired sidewalk-shed design, it’s hardly the only effort to make construction sites more visually appealing to passersby. Ever-more public art is popping up along construction sites, thanks to the Downtown Alliance’s Re:Construction prgram; the NYC Department of Buildings’ urbancanvas; and ArtBridge, an organization devoted to displaying emerging artists’ work on scaffolding, noted its director, Jordana Zeldin.

Artist Rodney Durso decided to found ArtBridge while living in a building covered in long-term scaffolding, London Terrace Gardens in Chelsea. He didn’t see the sidewalk shed as an eyesore — he saw its potential as a giant “blank canvas,” he said. He found an ally in Joe Covello of United Hoisting and Scaffolding, who lent his technical advice and support.

Durso has found that building owners and property manage-ment companies don’t always welcome the idea of allowing art on scaffolding, but he thinks that will change once they start to understand its potential as a public-relations boon. Exhibiting public art on a construction site is a way that “a building owner can bring attention in a positive way,” he said.