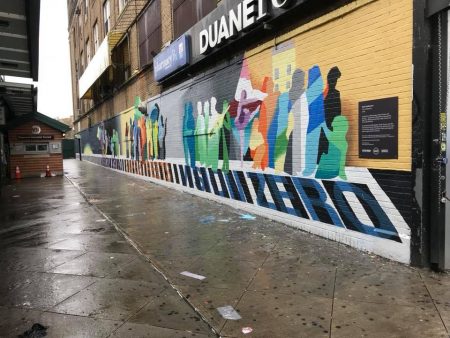 More than a hundred people, including city officials and area residents, gathered on Saturday to unveil a new mural commemorating three pedestrians killed in recent years near the Myrtle-Wyckoff intersection on the border of Ridgewood and Bushwick.

The mural, which runs along the back of Duane Reade on Palmetto Street under the subway overpass, is a project by Families For Safe Streets, a non-profit dedicated to implementing the city’s Vision Zero initiative. It was made in collaboration with fellow non-profit ArtBridge, which supports large public art installations across New York City.

The mural honors Hui Wu, a 26-year-old who died in 2009; Ella Bandes, who died in 2013 at 23 years of age; and 60-year-old Edwin Torres, who died in 2014. All three were all struck by MTA buses near the junction. Painted by artist Ruth Hoffheimer, the mural depicts groups of colorful silhouettes standing in a crosswalk over the words “Safer Streets” and “Vision Zero.” The mural is meant to represent the community, diversity and creativity present in the neighborhood. “I see them also as protestors who are fighting for safer streets and claiming their right of way,” Hoffheimer told the Ridgewood Post. Hoffheimer met with Ken Bandes and Judith Kottick, the parents of Ella Bandes and leaders of the mural project, to learn about their daughter and incorporate elements of her into the design. Dancers and musicians can be seen throughout the painting–Ella was both. While they were unable to reach the families of the other two victims, Families for Safe Streets Coordinator Chana Widawski says they were always kept in mind during the creation process. “There is no question that this mural is 100 percent in their honor and in their memory,” Widawski said. Advocates at the gathering also called for greater street safety measures throughout New York City, and referenced the Vision Zero Street Design Standard, a plan put forth by Transportation Alternatives, the non-profit that vouches for safe streets.