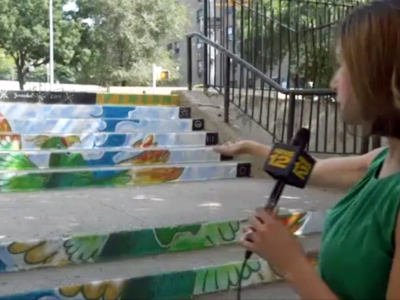 MORRISANIA – Sets of murals along three concrete step streets have been added across the city this summer in an effort to bring a more lively environment to the community.

Artist Josie Gonzalez was among those to transform the old concrete steps in Morrisania into murals over the past week.

Gonzalez’s creation on East 164th Street and Third Avenue depicts a bird rising up the stairs in a tribute to her Puerto Rican roots and love of world culture.

Diana Perea is another artist involved with the project, who decided to try a spice up the mundane task of walking up stairs, while Laura Verez added a cross-stitch pattern in her work, a nod to old traditions.

The mural, and many others in the area, were made possible this summer thanks to the nonprofit group Artbridge in connection with New York City agencies.