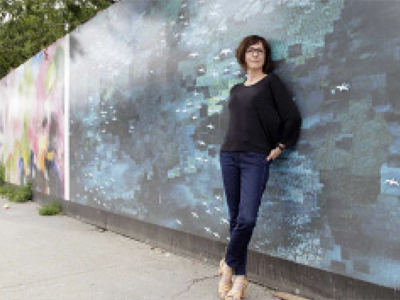 New York City has about 1 million feet of construction scaffolding at any given time, and some of it is turning into art. Artists submit their work to an expert panel that chooses which to showcase at construction sites around the city.“Art has the power to inspire kids — to make the difference between picking up a gun or picking up a paintbrush,” said Linda Harris, a retired city bus driver who stopped before an installation in Brooklyn’s high-crime East Flatbush neighborhood on a hot August day. Eight artists’ works grace plywood fencing around an apartment building going up for special needs and low-income families. Minutes earlier, a little girl almost tripped as she suddenly stopped to admire the colorful panels before dashing on.

This is not graffiti or street art.

The project is run by ArtBridge, a nonprofit mounting high-level art on streets. Advisers have included artists and curators from world-class institutions including the Guggenheim Museum, Parsons School of Design and the Brooklyn Museum of Art.“We strive to show the kind of art one might expect to find in a gallery or contemporary museum,” says ArtBridge director and curator Jordana Zeldin, who oversees the organization’s gallery and studio in Manhattan’s Chelsea neighborhood.

About a half dozen installations have been mounted in New York City. They cost $5,000 to $30,000 each depending on location, scope and size.Other art adorns scaffolding in Brooklyn’s Dumbo, a tony redeveloped neighborhood of galleries and boutiques.There, a work by Yugoslav-born New York resident Aleksandar Macasev spans 306 linear feet of scaffolding. Called “ChromaTweet,” stripes of color represent his moods on any given day during a two-year emotional journey, as recorded in his blog-turned-social-network.